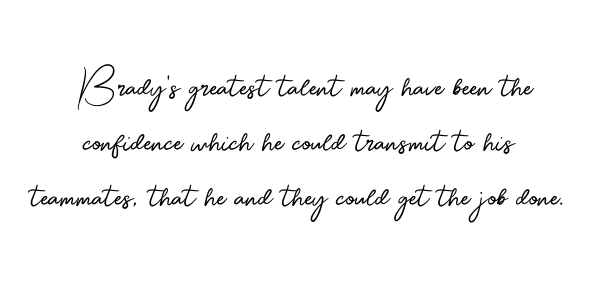 There are not many quarterbacks who’ve played 20 seasons in the NFL. There is only one who played all 20, his whole career, with the same team. But that sequence will now end. Tom Brady announced yesterday that he was leaving the New England Patriots, and will play his 21st NFL season elsewhere.

His legacy as the greatest quarterback ever will not be damaged by his leaving. Since replacing Drew Bledsoe, who was injured during the 2001 season, and leading the Patriots to an upset win over the Rams in Super Bowl XXXVI, Brady and head coach Bill Belichick have assembled the longest stretch of excellence in NFL history.

In 2002, they missed the playoffs when they lost the division title to the New York Jets on a tiebreaker. In 2008, when Brady was injured in the first quarter of the first game, they again lost the division title on a tie-breaker, to Miami Dolphins. In every other season since 2001 they have won the AFC East. Every year since 2003 they have won at least 10 games. And of course they’ve played in nine Super Bowls, winning six of them, the last with the most remarkable comeback, from 28-3 down to the Atlanta Falcons, in Super Bowl history.

Does style of play make Brady greatest of all time?

The argument for Brady as the GOAT rests on the team’s winning, but also on his own ability to win in different styles of play. When the Pats had Randy Moss at wide receiver, Brady threw 50 touchdown passes and the team went undefeated until being upset by the New York Giants in the Super Bowl. When they had a power runner like Corey Dillon, they played ball control, and without a big-name receiver, Brady was coldly efficient.

And in recent years, the Pats played a spread offense, full of short passes that demanded constant accuracy.

In any style, they were still able to win, and though wins can come or go based on single moments of chance, or brilliance, or boneheaded mistakes, Brady’s greatest talent may have been the confidence which he could transmit to his teammates, that he and they could get the job done.

Tampa Bay likely to be next destination

Brady, who will turn 43-years-old before the 2020 season starts, will not be the oldest QB in modern league history. George Blanda played until he was 48, though his last nine seasons were primarily as a kicker, and in his last four he threw only 22 passes. Vinny Testaverde, Warren Moon and Steve DeBerg all played at 44, Doug Flutie at 43, though parts of Moon’s and Flutie’s careers were played in Canada.

But Brady will be the first quarterback of his age to be considered a priority free agent, though at this point the competition for his services has declined.

Indianapolis Colts signed Philip Rivers, a spring chicken at 38, from the LA Chargers, but only to a one-year deal; Brady has indicated he wants to play until he’s 45. He was linked to the Tennessee Titans, where former-teammate Mike Vrabel is the coach, but they elected to stay with their incumbent, Ryan Tannehill, who led them to an upset win over the Pats in last season’s playoffs.

Sources have indicated that Brady intends to sign with Tampa Bay Buccaneers, likely sometime after the official league year begins Wednesday evening in America. That took Brady’s destination off the betting markets, where four teams had been in the mix, at least theoretically.

San Francisco 49ers, in the most improbable bit of speculation, were supposedly unhappy with Jimmy Garoppolo, Brady’s former backup, and wanted to bring him in. Oakland Raiders, with Jon Gruden’s mercurial affections, seemed interested, and willing to move on from David Carr. The Chargers lost Rivers, and journeyman Tyrod Taylor is their projected starter. The effect of all this interest was probably to cement Brady’s desire to see what he was worth on the open market, and perhaps go to a team not, like the Patriots, in the throes of ‘money-ball’ style rebuilding.

Tampa Bay might well suit Brady, not least because it’s the only NFL team whose initials match his own, making it a great marketing opportunity.

But seriously, although the Buccaneers have been a Davy Jons Locker for quarterbacks: Steve Young, Doug Williams and Trent Dilfer all won Super Bowls AFTER Tampa discarded them; the 2019 Bucs were a better team than their 7-9 record, losing a number of close games due to quarterback Jameis Wnston’s proclivity for ‘unforced error’ kinds of turnovers.

Coach Bruce Arians is a proven success with quarterbacks, with Ben Rothliesberger in Pittsburgh, Andrew Luck in Indianapolis and Carson Palmer in Arizona; he was also able to coax respectable seasons in Arizona with a string of mediocre passers. He is known for liking the deep passing game, and has a top pair of targets in Tampa in Mike Evans and Chris Godwin, but he’s also known for risking quarterbacks in the pocket as deep throws develop; Winston took 47 sacks last season, second-most in the NFL. Arians might also be seen, personality wise, as the sort of anti-Belichick.

How do we separate quarterback from coach in terms of greatness? The 2020 season might provide a yardstick.

Joe Montana didn’t win a Super Bowl with the Kansas City Chiefs; Brett Favre didn’t with the Minnesota Vikings or Jets. Will Brady cement his greatness by leading the Bucs to a crown? Will Bill Belichick, after 20 seasons plugging Brady into the lineup, be able to keep the Pats in contention?

This is the interesting betting market to follow, where you will find the Bucs have shortened in price with Brady’s addition, and the Patriots have drifted: they are now on level-pegging at 17/1 to win Super Bowl LV.

Cam Newton also on the move?

And if you’re curious about quarterback destinations, Carolina Panthers’ Cam Newton is now in the spotlight, since the team signed Teddy Bridgewater from New Orleans Saints to take them into next season.

The situation is different from Brady’s: Newton still is under contract to the Panthers, so unless they were to release him, they, not the player, have more control, and will have to be offered players or draft picks in return. And of course Cam’s recent injury history has to be cleared up before anyone would move. 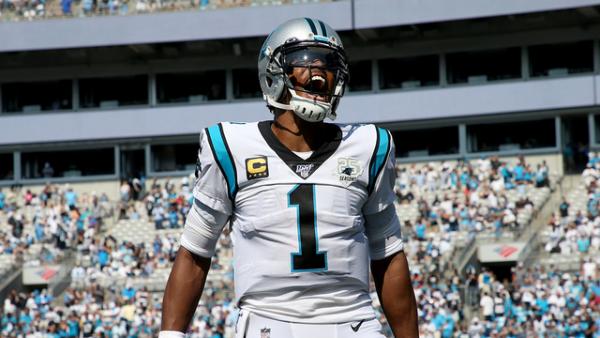 Right now the Chicago Bears, who keep saying they are happy with Mitch Trubisky, but no one believes them, are 9/5 to be Newton’s next team, with the Chargers right behind them at 6/4. I like the fit for Cam with LA, but wonder what they could offer?

The Patriots, at 5/1, intrigue me: it would be a coaching challenge to fit Cam’s individual talent into their changeable systems. Washington Red Skins, like Chicago, say they are happy with their incumbent, but no one believes them; they’re 7/2. And Miami Dolphins, at 15/2 is an intriguing long-shot too; they are expected to take a QB in the draft, they have Ryan Fitapatrick coming off a decent season as a starter, and former Arizona top-pick Josh Rosen is still around.