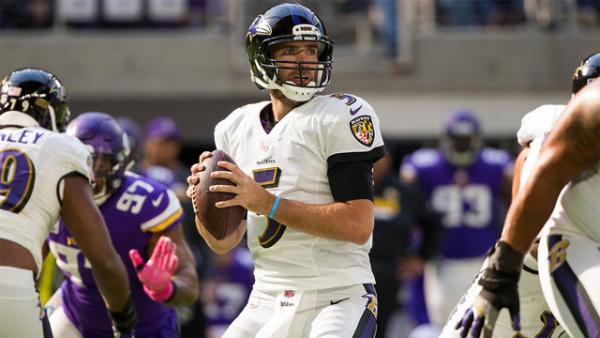 The NFL season has gone all rollercoaster, at least as far as point spreads and over/unders are concerned. Personally, I find that straight up I’m at my usual pace of 2/3 right (my average week so far is a little better than 10-5) but as you know, we are really ducking and diving here to stay in profit.

Last week’s best bet, which I took after advising it on the Betfair NFL Only Bettor podcast, was the Eagles. Shame on them, shame on me. The outside bet was the Ravens, but the home dog Pats played a blinder. It’s hard to be angry when a team exceeds expectations, as opposed to a team like the Eagles completely failing to live up to them.

It’s also hard to be angry when you’re sitting pretty with Buffalo on the moneyline, 11 seconds left, and you see a Hail Murray pass that is probably the most spectacular since you saw Doug Flutie’s for Boston College against Miami. It’s a hard way to lose, but it would be churlish to complain about calls or those two sure picks the Bills dropped. I had the freedom to laugh at Nick Chubb eschewing a TD with Cleveland up 10-7 but giving Houston 3.5, because I had recommended you to simply go under 48.5. Rarely am I so correct.

Last week’s value bet, Pittsburgh, also came in, as did the over 45.5 against the Bengals, if only by half a point! And I also advised on the Vikings giving 2.5 to the Bears, the 19-13 Mess on Monday night wasn’t fun to watch, but it helped straighten out week 10 for us. Now on to week 11.

Browns can edge out Eagles in low-scoring game

One problem for the Ravens is that Calais Campbell and Brandon Williams both have not practiced this week; if they remain out it makes the Ravens vulnerable to the run. Hollywood for the Ravens and AJ for the Titans are second-year receivers who need to step up (AJ didn’t practice Thursday and may be out). The Titans’ were getting 6.5, which has gone down to 4, so at 2/1 on the moneyline this might be a value bet to consider (though I don’t make it my outside bet pick).

Questions about both teams makes unders the play in Texas

It seems odd to me that the Texans are home dogs against the Pats, but that’s gone down to 1.5. Bill’s always been able to scheme fairly well to contain DeShaun Watson, and he doesn’t have a DeAndre Hopkins to throw to: the question is whether the Pats will man-cover guys like Will Fuller and give up the odd big score. And whether Cam Newton’s return to something like Cam Newton is real. Either way, I think the total falls short of 50.

I would watch the injury report before taking anything in the Panthers v Lions match-up, but if Christian McCaffrey indeed is not playing, and PJ Walker starts at QB, the Lions laying 2.5 at 10/11 would be OK. That’s an ‘if’ bet though. Minnesota (-7 at 10/11) v Dallas tempts me, and the Jets and Chargers to go over 46 at 9/10 also does, even though the Jets are the Jest.