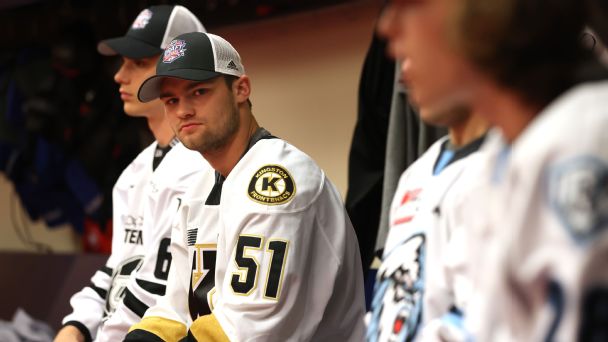 The 2022 NHL draft, to be held at Montreal’s Bell Centre, is scheduled to begin Thursday night at 7 ET (ESPN), with plenty of intrigue from the very top down.

While Shane Wright of the Ontario Hockey League has been considered the most likely player to be taken by the Canadiens at No. 1, that isn’t a given. From there, we have the usual rumblings about potential swaps, teams moving up and players whose stock is on the rise.

We asked ESPN hockey reporters Greg Wyshynski and Kristen Shilton the biggest questions entering the draft, including an assessment of the overall class, names to know at the top of the draft, biggest wild cards and more.

The quality of an NHL draft class is superficially established by the talent at the very top. For example, the 2017 draft was considered “weak” because neither Nico Hischier (New Jersey) nor Nolan Patrick (Philadelphia) were seen as “generational” talents on the level of Auston Matthews or Connor McDavid. Now it’s seen as the draft that bestowed Cale Makar, Elias Pettersson, Miro Heiskanen, Jason Robertson and Robert Thomas upon the NHL.

To that end, the 2022 draft could look a lot like that one. Center Shane Wright, the consensus No. 1 pick, is also not Matthews or McDavid.

As in 2017, there’s been a lot of debate and speculation about who will actually go first overall to the Montreal Canadiens because there isn’t a “generational player” at the top. Could be Wright. Could be someone else.

But don’t let the top pick fool you.

The first round leans heavily toward centers, who could encompass half the first round, and defensemen, two of whom are expected to go in the top six. It’s going to be a huge draft for the USA Hockey National Team Development Program, too. The record for USNTDP players taken in the first round is eight in 2019. This draft could match that total.

If there’s a position where the draft is soft, it’s in goal. The last draft that didn’t have a goalie taken in the first round was 2018, when one was not selected until the 39th pick. Most projections have this draft’s first netminder taken outside the top 50. — Greg Wyshynski

Who are the names to know near the top?

Wright has long been considered the favorite for Montreal to select at No. 1. He’s got size (6-foot-1), speed and skill, is good in transition and is dangerous in most situations on the ice. Basically, everything a team would want in a potential future franchise player.

However, Wright isn’t the only contender for that top spot. Slafkovsky’s name has been amplified, especially in recent weeks as the most likely prospect to supplant Wright at No. 1. The big Finnish winger (he’s 6-4, 230 pounds) doesn’t score like Wright but can get to the net, is a good, strong skater, creates in all three zones and plays a smart game.

Cooley and Gauthier are coming from the same USNTD program, with Cooley the higher rated of the two. He’s got franchise-player potential too, and might be the most gifted of the lot offensively. Gauthier is more of a playmaker, and is exceptionally smart and hard to push off pucks. He’s less dynamic, but is solid in all three areas of the ice.

Jiricek is an always-coveted right-shot defender who is good on breakouts and balances defensive responsibility with puck-moving ability up front. He’s growing more into himself and could develop into a top-four NHL talent. — Kristen Shilton

Who are some “wild card” players in this draft class?

The cards don’t come much wilder than Brad Lambert. At one point, he was seen as a top-three pick. Then he struggled with JYP of Liiga, moved to the Lahti Pelicans and struggled there, too, finishing with four goals in 49 games total between both teams. But his skill, and especially his speed, is exceptional. He could go higher than his current mid-round projections. But some mock drafts have him going just before the second round.

Our favorite wild card? Lane Hutson, an 18-year-old defenseman with the USNDT who can absolutely light up the scoreboard, but who is listed at 5-8. For comparison, St. Louis Blues defenseman Torey Krug is listed at 5-9. But we stan a Short King.

Then there are the Russian prospects. Forwards Danila Yurov and Ivan Miroshnichenko would be among the most talented players to go in the first round. But with Russia’s invasion of Ukraine, NHL teams could be hesitant to select Russian prospects. Miroshnichenko is even more of a wild card, having missed part of last season with Hodgkin’s lymphoma. He’s undergone treatment and is back on the ice. — Wyshynski

Speaking of Russian players, how are teams approaching them in this draft?

NHL commissioner Gary Bettman has repeatedly said players from Russia and Belarus can be selected in the draft. While the league has severed its business ties with those countries and has yet to make a determination on whether Russia would be allowed to play in the NHL’s next World Cup, those decisions aren’t meant to affect how teams view Russian prospects. Given that, there’s no reason to think general managers will automatically pass on Russian players. — Shilton

Which team will be the most interesting to watch in Round 1?

I’ve got my eye on the Columbus Blue Jackets.

GM Jarmo Kekalainen watched his team struggle through two non-playoff seasons. He traded away veteran players Seth Jones, Cam Atkinson, David Savard, Nick Foligno and Max Domi, while giving the roster over to young talent last season. The Jackets are in an enviable position in the first round with the Nos. 6 and 12 picks. Their first pick could net Kekalainen, a good young defenseman such as Simon Nemec or David Jiricek. Or the GM could be aggressive and trade one or both picks to move up in the draft — or for current NHL talent.

One thing to keep in mind: Multiple reports say Kekalainen was in on Lightning defenseman Ryan McDonagh before Tampa Bay dealt him to the Nashville Predators. There are rumblings that the Blue Jackets have discussed Jakob Chychrun with the Arizona Coyotes. The Jackets have the capital to start getting aggressive, and Kekalainen is just the GM to do it. — Wyshynski

Do you expect any big trades? If so, who are some of the players to watch?

I asked one NHL general manager this week about the trade market. “We aren’t the NBA,” he said. “Some teams just aren’t willing to make huge, bold trades even if it can make them better.”

That said, there are still a number of significant names who could move at the draft. The Chicago Blackhawks have said that every player on their roster who doesn’t have trade protection is available. Left wing Alex DeBrincat, a 24-year-old point machine, does not have any protection and hence is one of the most desirable players available. The Canucks and 31-year-old forward J.T. Miller, whose contract is up after the 2022-23 season, don’t seem close to an extension, so he could be on the move. Defenseman Jakob Chychrun of the Coyotes remains available but won’t come cheap.

Winnipeg Jets veteran winger Blake Wheeler has requested a trade. Vladimir Tarasenko of the Blues asked to be dealt last summer when his stock was down; after a 34-goal season and one year away from free agency, would St. Louis seek to move him now?

Finally, one of the likeliest to move: winger Jesse Puljujarvi, whose time appears up with the Edmonton Oilers and who could use a change in scenery. He was the fourth overall pick in 2016 but is 11th in goals among members of that class. Just a reminder that today’s top picks can be tomorrow’s top trade options. — Wyshynski

What will the Sabres and Coyotes do with their three first-round picks?

A seven-part, behind-the-scenes docuseries going on and off the ice and in locker rooms for an all-access pass during the pursuit of the Stanley Cup. Watch on ESPN+

The Coyotes currently have the third, 27th and 32nd picks in the first round. If the first two picks play out as expected, they’ll have their choice of center Logan Cooley, defenseman Simon Nemec and defenseman David Jiricek. Sportsnet projected that winger Cutter Gauthier, who has the kind of size that GM Bill Armstrong favors, could be the pick at No. 3 as well. The expectation is that the Coyotes will use all of these picks — Armstrong’s calling card is his draft prowess. Expect at least one defenseman and potentially a big swing such as Russia winger Ivan Miroshnichenko.

The Sabres select ninth, 16th and 28th. They’ve been widely linked with two players, both wingers: Jonathan Lekkerimaki of Djurgarden (Sweden), who has goal-scoring upside and could go at No. 9; and Danila Yurov of Magnitogorsk. The 28th pick, one assumes, will be another defenseman to join a growing group under last season’s top pick, Owen Power. — Wyshynski

Will any goalies go in the first round?

As Greg indicated earlier, it would be surprising if a goalie came off the board early. There’s good depth at forward — particularly at center — near the top of the draft, and that will be hard for general managers to pass up with their first picks.

The No. 1 netminder to watch is Topias Leinonen. He’s got impressive size (6-4, 214 pounds) that will certainly be attractive to teams, and he possesses a good deal of raw talent. For such a large body, Leinonen is agile and has solid technique. It’s unlikely all that will push Leinonen into the first round, but look for him to go early in the second. — Shilton

What’s some buzz you’ll be keeping an ear out for in Montreal ahead of the draft?

I’m curious to see if all the buzz around teams trading their first-round picks actually happens. Will we see more of that type of movement than we have in years past, particularly from clubs that want to compete now (Ottawa, New York Islanders, perhaps) as opposed to restocking their cabinets for further down the road? And what will those trades look like — do they involve big-time names or will there be more depth moves targeted to fill holes on rosters? I’m also intrigued to see if we can get a feel for how the market will unfold with free agency a week away (July 13). — Shilton